Order of AMD VGA Performance from Lowest to Highest Type

AMD VGA Performance Sequence from Lowest to Highest Type 2021 – So that the performance of a PC or laptop when used for gaming or editing can work well, a VGA card is needed. Currently, AMD is one of the VGA that dominates the market. Because the technology is more sophisticated and superior to other brands.

Order of AMD VGA Performance from Lowest to Highest Type

There are several types of AMD VGA that have performance levels. You have to know the order of AMD’s VGA based on its performance. So you can find the right VGA according to the needs of the PC or laptop you are using.

The following is the order of several types of AMD VGA based on their performance. For gaming needs, AMD presents the R-series that has performance that is tailored to the needs. For the AMD gaming VGA series, there are 3 types at once which are given different numbering codes. The code number behind the R is to make it easier for consumers to know the level of performance.

The order of AMD VGA types from lowest to highest for this series is as follows.

The order of AMD Radeon R5 is the lowest among other R-series. Because, it has the lowest performance and is the first series issued for the R-series. For those of you who need a GPU for regular gaming activities, the Radeon R5 is good enough.

Therefore, usually this graphics card is used in cheap laptops with entry-level specs. Radeon R5 is perfect for playing regular games that don’t require a laptop with high RAM.

Next, the AMD Radeon R7 like the one I’m using has better performance than its predecessor. This VGA is very balanced between performance and price. Because, this graphics card is usually used for middle-class laptops.

Basically, laptops that already use Radeon R7 can be used to play various types of games. It’s just limited to settings from low to medium. So, the Radeon R7 can’t be used for gaming activities that are too heavy.

In the R-series, the Radeon R9 is the highest level with the best performance compared to the R5 and R7. You can use a laptop with a VGA Radeon R9 option for heavy gaming activities.

Radeon R9 is usually used on special gaming laptops that do require high specs. So, to play e-sport games or games that require high settings, it will run smoothly. 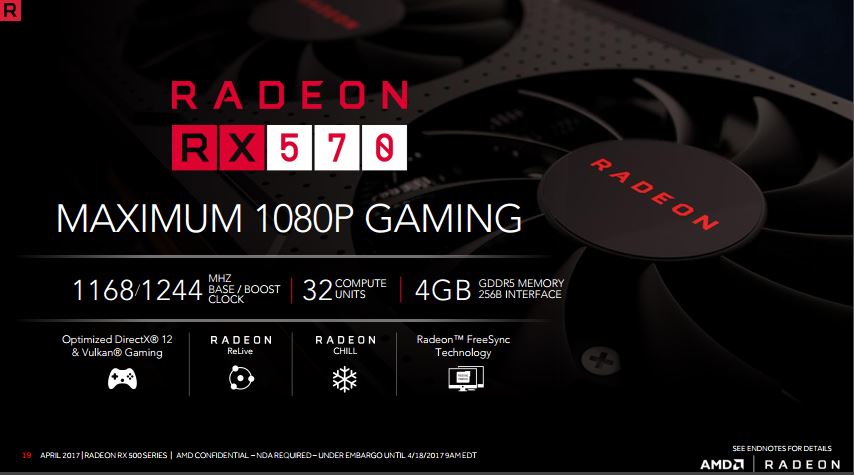 If you are curious about the performance of the best gaming graphics card from AMD, here we will review the order of the AMD Radeon RX 500 Series VGA performance from the lowest to the highest.

Affordable gaming VGA card for all people who save power with updates on gaming performance and productivity. Because the AMD Radeon RX 550 VGA already supports games in Full HD resolution such as Overwatch on High graphics performance, Rocket League, DoTA 2 and Counter Strike: Global Offensive on Ultra graphics settings.

For eSports game lovers who need a seamless online gaming experience and want to play the latest 3D games up to 1080p resolution, the Radeon RX 560 VGA is the recommended option.

This best PC gaming VGA can provide game play performance above 60 FPS on the latest popular games such as Civilization VI, DOOM, Battlefield 1, and Overwatch.

For gamers with a Full HD 1080p resolution screen, there is a recommendation for the latest gaming VGA at a lower price compared to the VGA above, namely the AMD Radeon RX 570 VGA.

Because the Radeon RX 570 VGA is very good for gamers who want to experience the latest popular 3D games such as Battlefield 1, DOOM, Sniper Elite 4 and Resident Evil Biohazard above 60 FPS at ultra graphics performance at 1080p resolution.

For the Radeon RX 580 type, which is the second highest series, it is equipped with 36 compute units with a max memory of 8GB GDDR5 and a base clock of 1,257MHz and can be boosted up to 1,340MHz.

The AMD Radeon RX 580 VGA is capable of gaming for popular AAA 3D ​​games on a 1440p resolution monitor smoothly at over 60 FPS at high graphics quality. Radeon RX 580 is also equipped with Premium VR Ready which is able to run the latest Virtual Reality games with high framerates above 100 FPS.

For those of you who crave a vga card that can improve PC computer performance in playing games with high quality settings, the best gaming vga AMD Radeon RX 590 is ready to fulfill your wishes.

The performance of playing AAA games is very smooth, up to 60 FPS for the latest games with all max settings at Full HD 1080p resolution.

The AMD Radeon RX Vega Series VGA is intended for gamers who want to play games at extreme resolutions, high image sharpness, and the latest cutting-edge features. This graphics card is equipped with memory with a capacity of 8 times that of GDDR5.

Radeon RX Vega 56 is one of the latest gaming graphics cards from AMD that has high capabilities to support you in running games with the maximum gaming experience.

This best VGA gaming card has an upgraded nCU which is much better (1 nCU = 64 stream processors) to be able to run at high clock speeds so that it can provide an extreme gaming experience using a monitor that is supported by a high refresh rate and resolution.

This API can use 4096 GPU processors to smooth computing performance simultaneously taking part of the processing load from the processor. The Vega 64 also features a 2048-bit memory interface and a memory bandwidth of 484 GB/s. 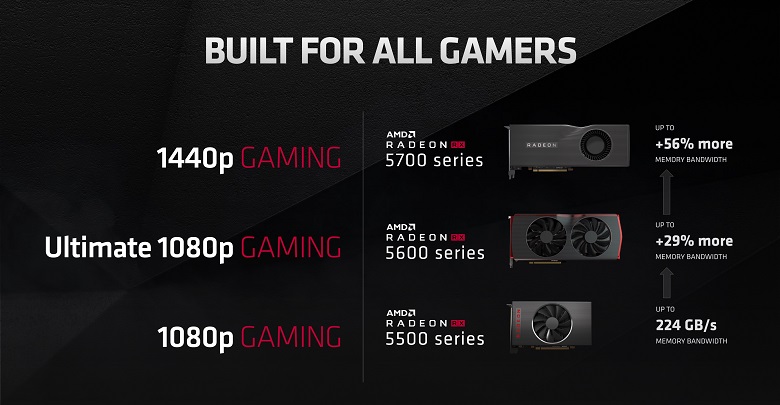 Usually, to get a gaming graphics card with high performance, you have to spend a lot of money. However, not with the Radeon RX 5000 series released by AMD.

The reason is, the price of this graphics card is sold at a cheaper price than its competitors. Not only offers low prices but also several other advantages. One of the mainstays is that it doesn’t take up a lot of power.

Radeon RX 5000 series also helps you to be able to play games without lag. So, even though it is used for heavy games, the laptop’s performance can run smoothly. Moreover, this series provides many new, more sophisticated features.

Some of these features include anti lag, booster, image sharpening, and others. The following is the AMD 2021 VGA sequence for the Radeon RX 5000 series from the lowest to the highest type.

The lowest type in the RX 5000 series is the RX 5500 XT. However, that does not mean the performance is lacking. Because, you can play games with 1080p resolution without a hitch.

If you are looking for a VGA for mid-range PCs or laptops, especially for gaming, then the RX 5600 XT is the right choice. The reason is, you can play many games with high resolution without spending a lot of power.

The highest VGA level for the RX 5000 series is the RX5700 and RX 5700 XT. Even the RX 5700 can match one of the best Nvidia VGA cards, namely the Geforce RTX 2600. You can enjoy heavy games on high settings without any problems.

The RX 5700 XT is no less good. Because, you can get 1.5 times better performance than one type of Radeon RX Vega series.

Both the Radeon R7 series and RX 5000 series can be an option when looking for a VGA with high performance. Moreover, the price offered by AMD VGA is cheaper when compared to its competitors.

You only need to know the specifications of each graphics card as a whole. It is very important to find the right graphics card according to your needs.

In addition, the selection of this graphics card must also be adjusted to the specifications of the laptop. Especially if you need a new VGA to strengthen the performance of the laptop / PC that is used.

That’s the order of AMD’s VGA based on their performance from the lowest to the highest type at this time. You can adjust the selection of the best VGA to your needs and budget.

Can Not Found Flash File All Except Storage Bat

How to check the difference between Original, OEM, and Super Copy Laptop Batteries