Can DDR3 RAM installed in DDR4 slots and vice versa ? –

You should understand DDR3 and DDR4 RAM compatibility, especially when assembling a PC because there are fundamental differences between the two. Here’s the explanation.

By the way, can DDR3 RAM installed in DDR4? Of course, to find out, you have to understand DDR3 and DDR4 RAM compatibility first.

Because, technically, they both have the same function. Namely as additional space in RAM memory in a laptop or PC as well as acting as External RAM.

Which, both of them will greatly affect the process speed of the multitasking system flow when opening several programs at one time.

However, there are some basic differences that need to be known and understood. Given the two types of RAM are similar but not the same.

So, what makes the two different? And, are the two compatible?

Can DDR3 RAM Installed in DDR4?

When you want to change DDR3 RAM to DDR4, of course several considerations are needed, one of which is about compatibility. Like a matter of comparison between DDR3 and DDR4 RAM.

For information that DDR4 itself is the latest generation. Or, in other words is the successor of the DDR3 RAM version.

The striking difference between the two is seen from the design form and the capacity or capacity of the space.

From that difference, it is quite obvious. Confirmed that DDR4 is not compatible with DDR3. In other words, DDR3 RAM cannot installed on DDR4 RAM.

Because, when viewed in terms of form or physical, it is impossible to insert DDR3 RAM in a DDR4 slot or vice versa.

Not without reason, generally the slots in DDR4 RAM types are wider than DDR3.

Of course, to improve PC multitasking performance, it’s not just about upgrading a good RAM memory.

There are other aspects to consider considering that the two have quite basic differences.

This is very different from the DDR4 RAM specifications. Considering this type only requires less power, which is 1.2 V.

From that alone it is very clear. Even if you can put DDR3 RAM in the DDR4 slot, it won’t work normally as it should.

Not without reason considering that even though it can installed, the slots offered will not affect the speed of the motherboard and will fail to provide the required voltage. Vice versa.

The discrepancy between DDR3 RAM and DDR4 RAM is of course also influence by the difference in specifications between the two. 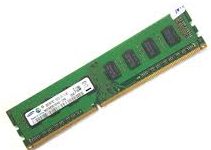 RAM DDR3 itself is a generation type that was launched in 2007 as the successor of DDR1 and DDR2.

This model has been widely use by many laptops today. The power consumption is quite efficient compared to the previous version, because it only takes 1.5V.

Some of the differences are quite striking, of course, seen on the advantages in the sector of specifications.

Among them, such as a larger capacity limit of up to 16 GB. In fact, the energy consumption is more efficient because it only takes 1.2V.

The frequency is also higher than the previous generation. Then, the slot and design are also different from DDR3 RAM.

In terms of specifications, of course DDR4 RAM is far superior to DDR3 RAM types.

Naturally, because the two types are different generations. Which, DDR4 is the latest generation with improvements in several aspects.

Well, understanding the basic differences between the two, of course it is clear and certain that the two are not compatible.

In other words, if you are going to upgrade RAM from DDR3 to DDR4 generation, it won’t be possible because of the difference in slots and sizes on the motherboard.

From this, it is clear that DDR3 and DDR4 RAM compatibility will clearly not support each other due to the basic and striking differences between the two.

Headset icon doesn’t want to be lost on a smartphone

How to check the difference between Original, OEM, and Super Copy Laptop Batteries