Xiaomi Update Failed [Can’t Verify Update] – For those of you who got the MIUI8 update. 5.4.0 or directly miui 9 based on Android NOUGAT which has failed to update and here I will give you a solution about failing to update the xiaomi rom (can’t verify the update / can’t verify

Maybe it can help a little. On xiaomi itself for all versions of xiaomi cellphones, especially xiaomi with stable roms (china official and global official) and xiaomi with developer roms, updates can usually be done via OTA (On the air) which can be processed through the default updater application xiaomi easily. 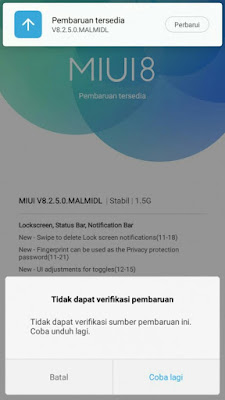 Unfortunately, in some cases, there are many who have failed the update process, Xiaomi can’t update even though the update file has been download completely 100%.

The most common cases of failed updates on xiaomi cellphones is the appearance of the error message “Can’t verify update” so that the update is not processed, the message appears even though the update is done via OTA.

The cause of the failed update (can’t verify update) There is no specific explanation why the update failed even though the update was done via OTA via the default xiaomi updater application. but the possibility of failure to update is as follows:

1. The internet network you are using to update is unstable, make sure to use wifi.

2. The update file is corrupt or damaged. This can happen if the internet network you are using is unstable.

How to fix failed updates

1. Please try to update again. Make sure the cellphone is connect to wifi.

3. Make sure the wifi internet network is stable.